Lottie Jane Shiels was born in 1893 and was the second child born to Thomas Shiels and Rachel Ann Brigham. He was a eighth generation descendant of Micheal Shiels.

The following is Lottie’s lineage.

Lottie Jane Shiels was born February 28, 1893 at Parry Sound, Ontario. She was the only daughter of Thomas and Rachel Ann (Brigham) Shiels. She also had an older brother John George. In 1899 the family moved to Killarney, Manitoba, where Tom worked for the Railroad. In 1905 Thomas immigrated to Saskatchewan taking up a homestead twenty miles North of North Hope, later known as Stoughton.

The family followed by train in 1906. The district in which they resided was known as Lost Horse District, later called Glenada. When the railroad came through the village of Corning came into being. It was from this point they got their mail, but there were no stores in Corning so groceries had to be purchased from Stoughton. Then a man named Mr. Zink started a little store at Momart. He travelled through the country with a dray carrying groceries and exchanged them for eggs from the farmers in the area. Later Mr. Zink purchased a building in the Golden West District, three miles West of the Shiels’. They purchased their groceries there. 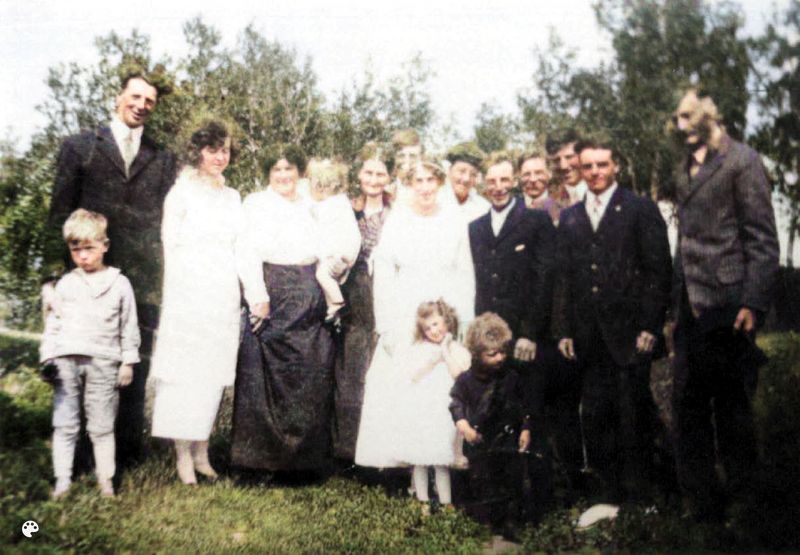 Lottie Jane Shiels and William Howard Burdett were married July 14, 1920 and resided with Tom and Rachel Shiels until the fall of 1926. Howard Burdett was the son of William and Maude Louise (Haycook) Burdett. Louise Maude Haycook’s sister Emily had the privilege of singing before Queen Victoria in a theatre in London, England.

Howard was born in Birmingham, England and received his education there including violin lessons which would give him and others enjoyment all his life. In 1906, Howard came to Canada with his parents. Howard and his father came west to get a homestead near Stoughton. Howard’s first job was working on a farm helping with gardening, dishes, etc. In 1910, Howard came to work in the district where Lottie lived. The Shiels family owned an organ that Howard used many times to tune his violin and this is how Howard and Lottie met and fell in love. 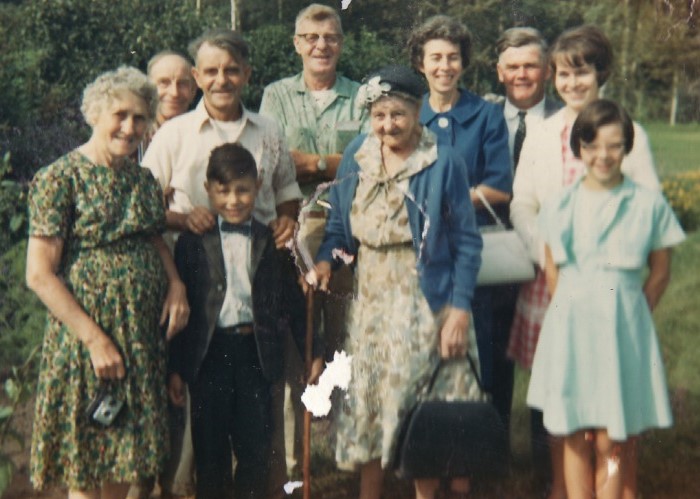 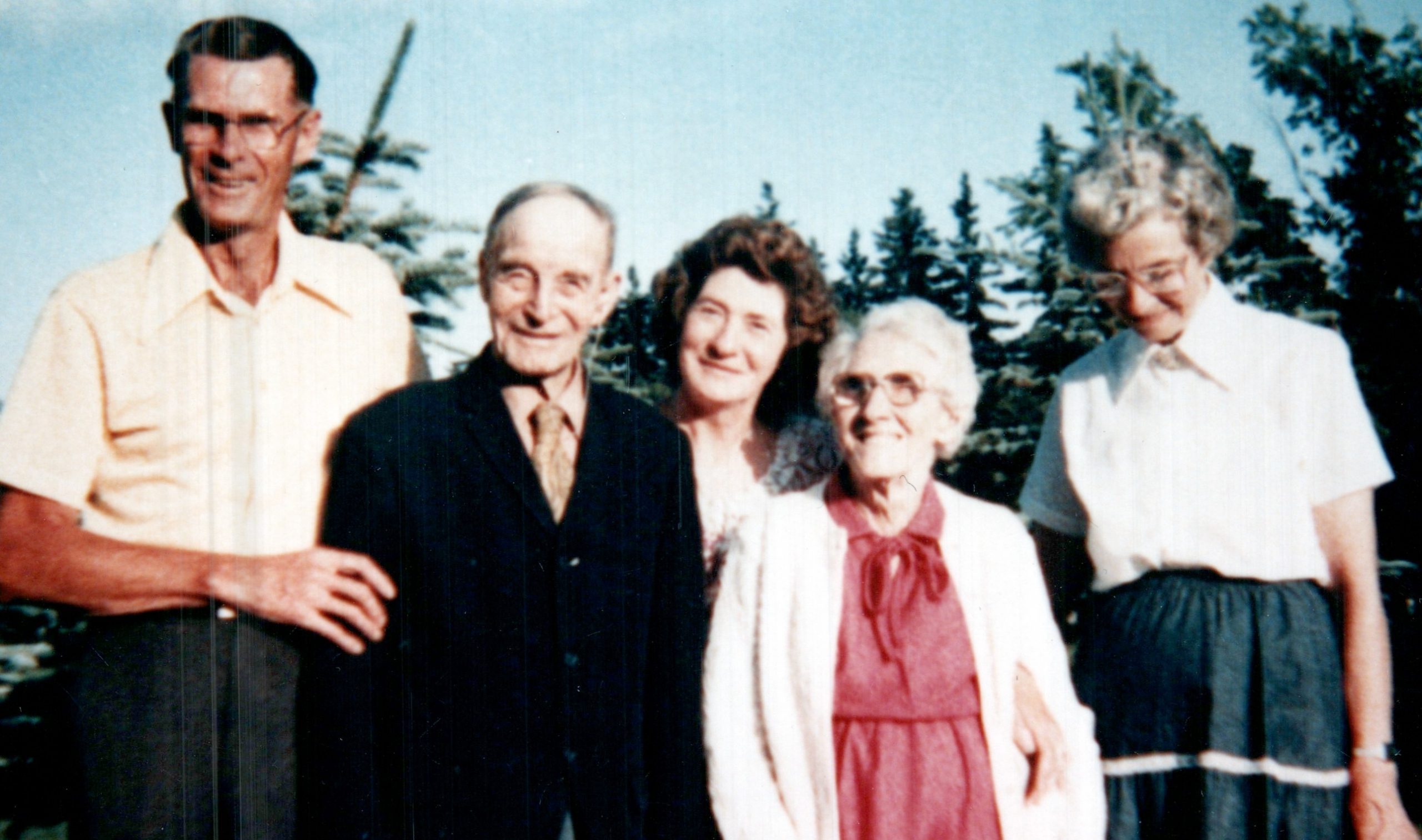 Two children were born to this happy union while living with Tom and Rachel, Eveleen Rachel was born September 12, 1921 and Norman John Edwin on December 25, 1925. In 1926 Lottie and Howard moved to their farm S.E. 25, 11 7 W2. Lottie’s father Thomas Shiels passed away January 25, 1928. Lottie’s mother, Rachel Shiels remained on her farm a short distance from Howard and Lottie. Howard and Lottie’s third child, Lillian Rosella Burdett was born on November 28, 1930.

The depression started in 1927 and was in full swing by the early 1930’s. In 1934 Howard and Lottie decided to move north to Tisdale, where they had heard that the land was better and the depression was not as bad. They took Rachel with them so they could better look after her. Howard travelled by train with the livestock and furniture. Lottie, Rachel, Norman, Eveleen and Lillian followed by car. The Corning store keeper Mr. Luke Deacon drove them to Tisdale. They stayed at Tom Stovin’s (a prairie neighbour who had come north before) until Howard arrived two days later. They moved to the Willow Hill district for winter then to Eastman School district for six years. It was during this time that Rachel Ann Shiels passed away, August 16, 1939. 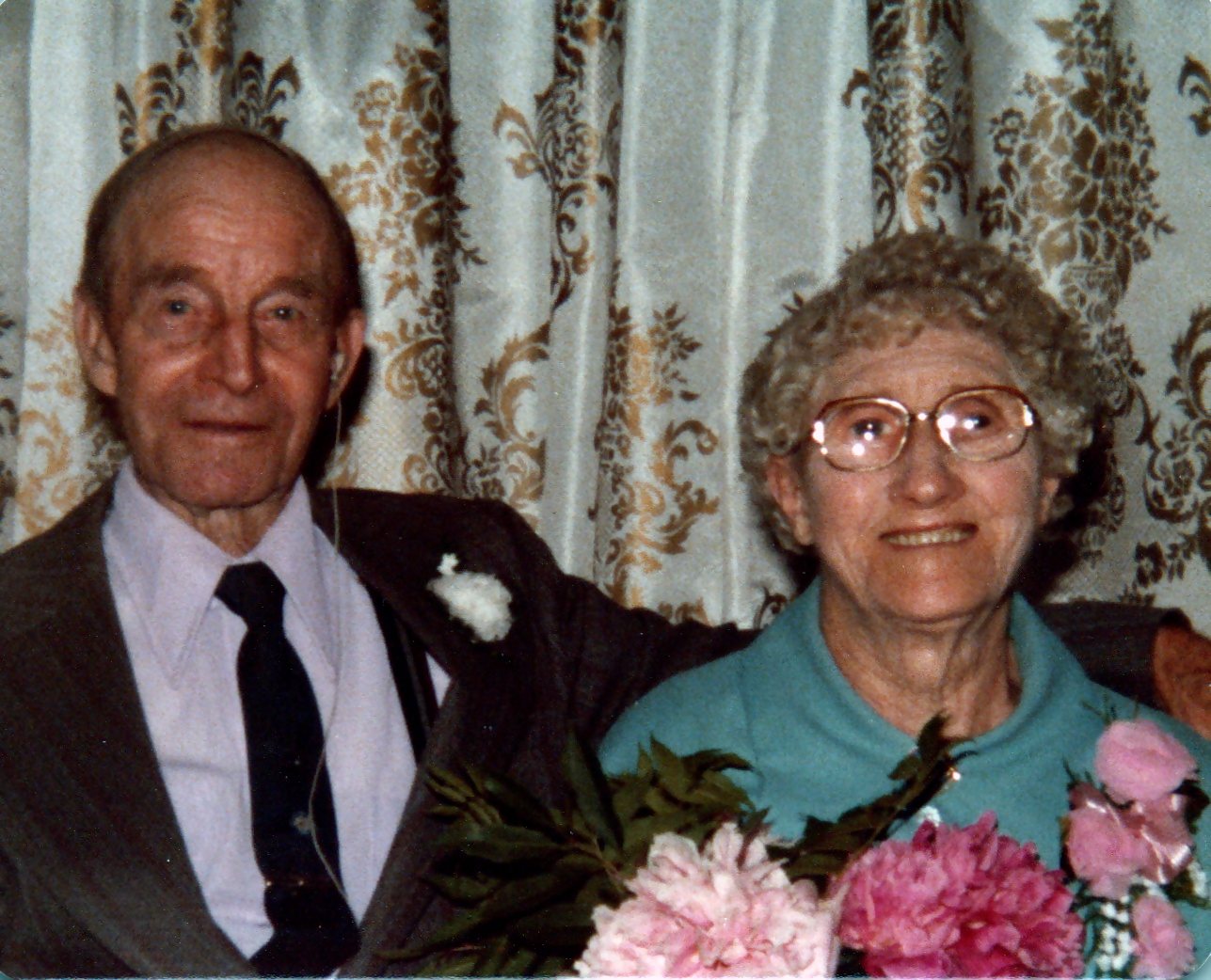 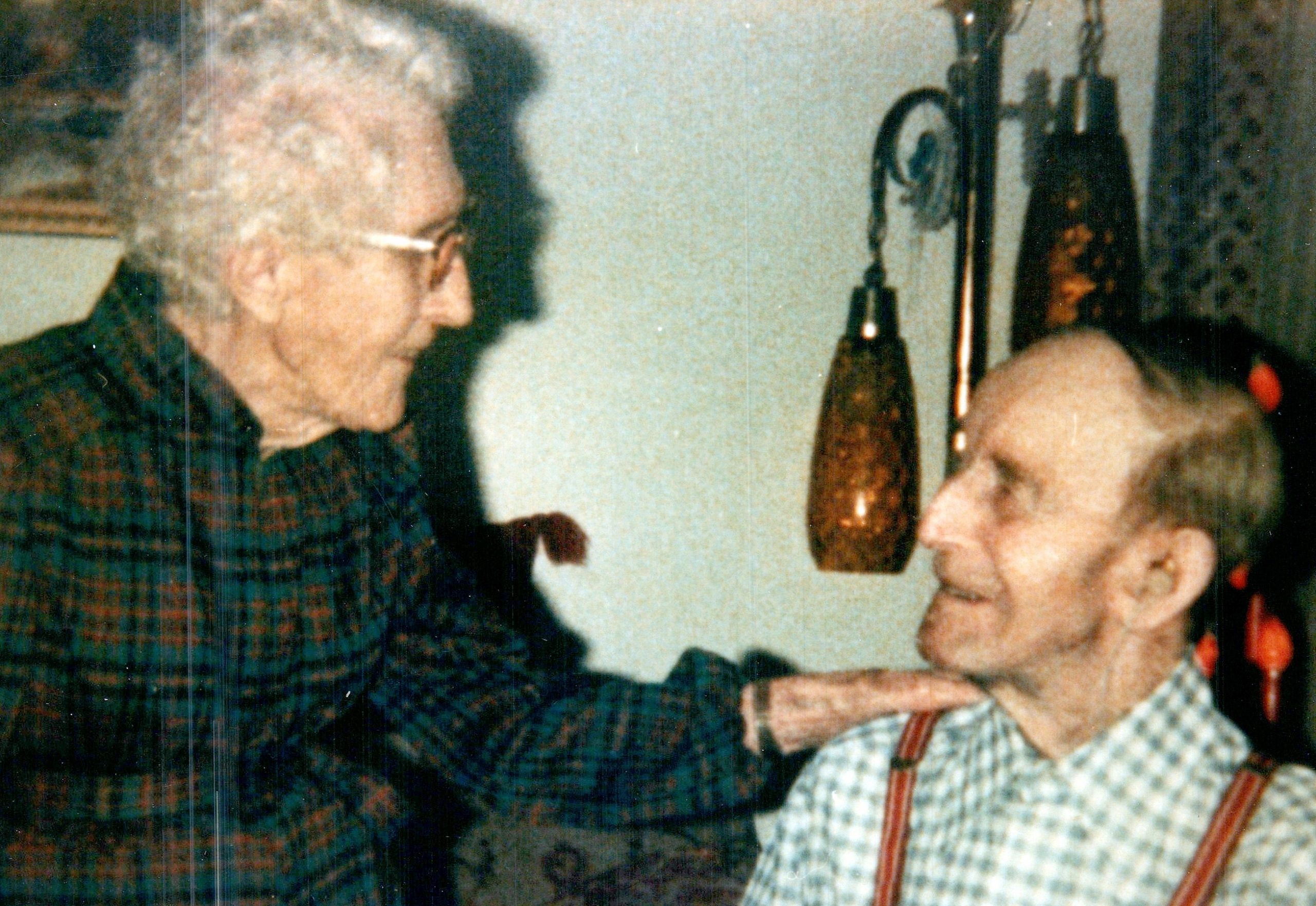 Lottie and Howard moved to the farm N.E. 27-43-14 which he Eveleen & Don Hooper bought. They remained on the farm until 1969. They then moved to a home in Tisdale, Sask where they lived the rest of their lives. Howard and Lottie were very active in the church. Howard took special enjoyment in playing his violin for the hymns. He was also a life-time member of the Golburn Agricultural Society.

Howard and Lottie moved into the Lodge in Tisdale and had their own little apartment there for many years. They both lived to be a ripe old age, well over ninety. They celebrated their 60th Wedding anniversary in 1980 and Lottie made her own outfit for the occasion. 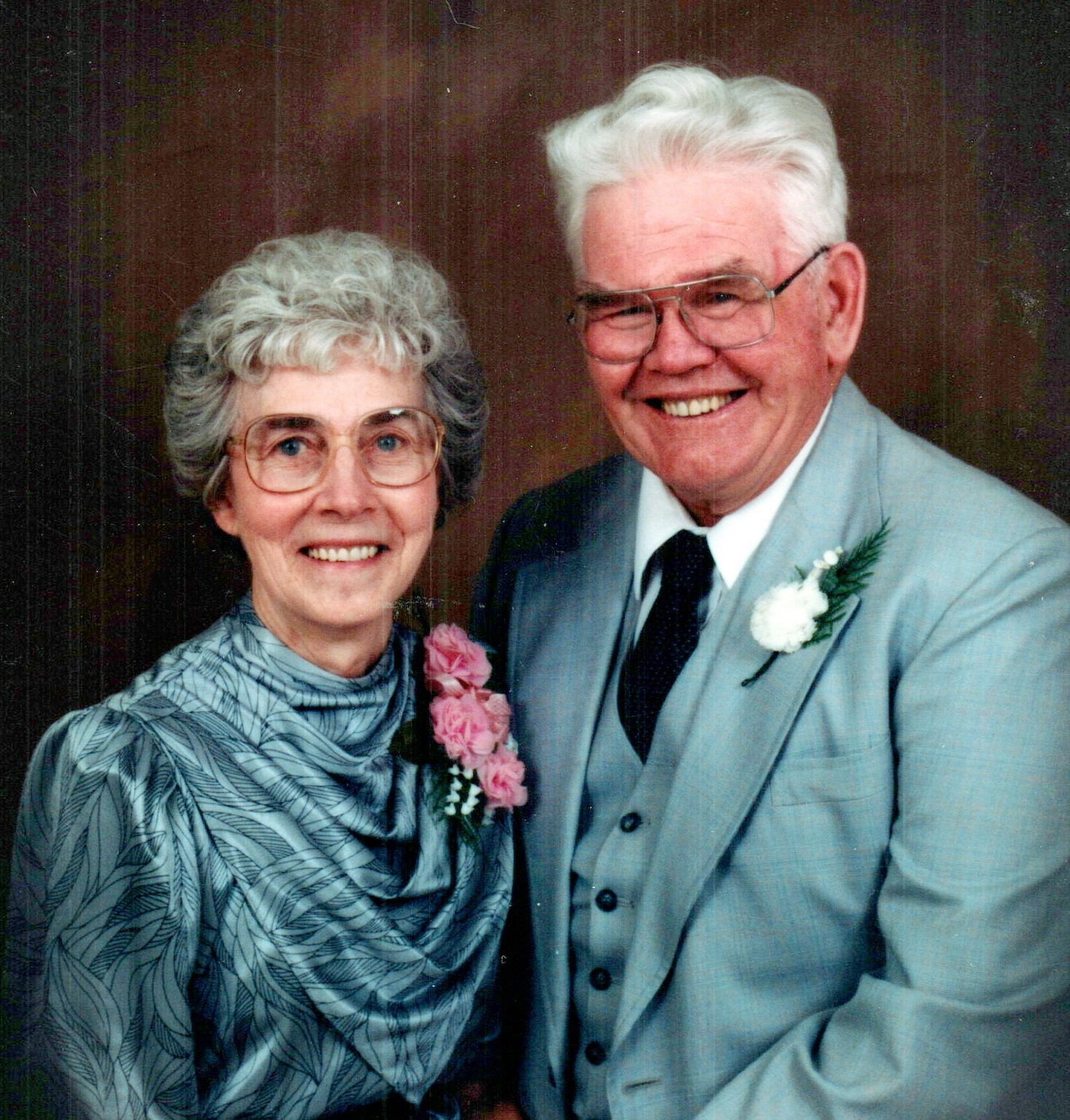 She married Borden Kenyon in Tisdale, Saskatchewan, on November 20, 1949, when she was 18 years old.